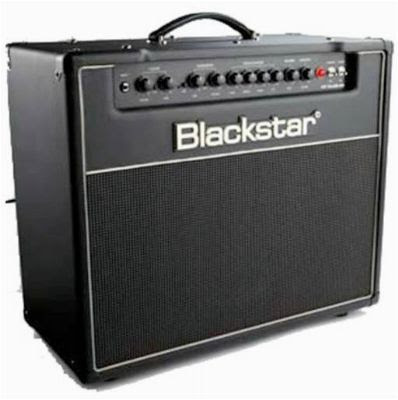 This will be the first in a series of reviews of amps as they show up around here for repairs. I intend to look only at a limited number of parameters: ease of serviceability and availability of documentation. These opinions are my own 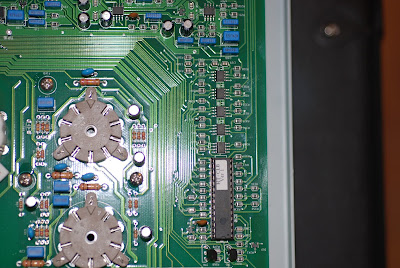 Recently a Blackstar HT40 like the one in the picture arrived. It had been arrested for attempted homicide, having tried to kill the owner with a jolt of electricity that actually melted a couple of guitar strings. It was bought used, so the warranty is not in existence.

The street price for these things is about $700 more or less at all the usual places. Cheap enough if you get good value but that's not what's happening here.

It looks like a nice stout production, but appearances can be deceiving.

During my preliminary information gathering process I learned that this amp has a processor on the circuit board that has some proprietary programming. That's the 32(?) pin number on the right with the sticker on it in the photo below. This processor with the special programming is made of unobtainium, kinda like the Maytag "Jazz" chip that caused my refrigerator to collapse and die. At least there I could get my hands on a schematic and a circuit board and it only cost eighty bucks.

You can read about that here.

In addition I found out that Blackstar service information is available only to authorized Korg service centers, which means it's not available to owners or to the independent service operators.

On opening up the amp for a look around I also noticed that the board is thin and flexible-and not in a good way, either, with circuit board mounted tube sockets already showing signs of distress and a wealth of surface mounted devices that are nearly impossible to remove and replace economically. For a 40w amp the output transformer is decidedly small.

I did find a burned trace on the circuit board and fixed it with a jumper and it now works intermittently when the jack is preloaded. Replace the jack? Didn't help.

One of the things we do when troubleshooting is to switch out suspect components as an information gathering and trouble localizing exercise-does this or that item change the parameters of the malfunction?

That's not going to happen with this amp because of the surface mount componentry. Between the lack of service information and the nonrepairability of this circuit board, most of these amps will end up in dumpsters or stuck in basements when they fail, which they all do inevitably. 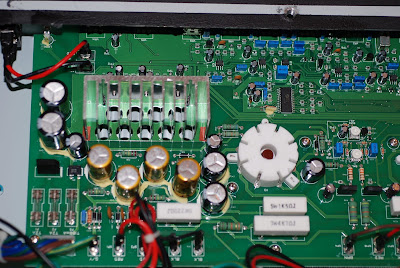 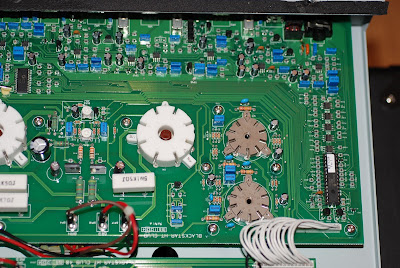 How about the rest of it? Well, the cabinet is made out of MDF fiberboard-not the most damage tolerant product out there. Tonewise it is brittle and harsh sounding. In addition the solid state reverb is synthetic and cheesy sounding, like a cheap pedal from a junkshop.

I wouldn't recommend this amp to anyone. Amps always break sooner or later, and having one that can't be fixed economically is just a waste of hard earned money. Hell, even Crate will provide service information to owners and the trade.

Truth in advertising suggests that this should be called Crapstar. 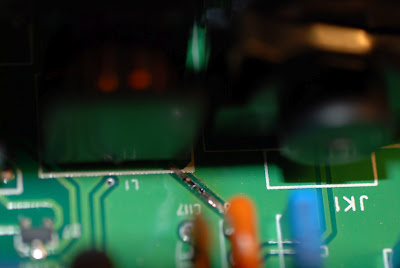 Posted by Robert Luedeman semi retired attorney and amp mechanic at 10:18 AM

Robert Luedeman semi retired attorney and amp mechanic
I'm a semi retired attorney and amp mechanic in central Iowa. I'm laying off the law and anything else I do not like due to my recent encounter with the Grim Reaper. Well. We passed by each other in the night and I got away clean. I moderate the posts here and I delete without comment those that attack me personally and are generally sophomoric, unlettered and play games with the truth. This blog isn't a public toilet and you don't get to write on the walls here, people. OUR CO-EDITOR: Darla Mondou comes to us through a fortuitous convergence of interest in ag law issues and technology-provided by those wonderful folks at Google and Blogger, who provide the forum. Darla is a graduate of the University of Arkansas School of Law and Graduate program in Agricultural Law, she hails from all over like me, and she is currently working on court appointed appeals in the federal system. It pays the bills.